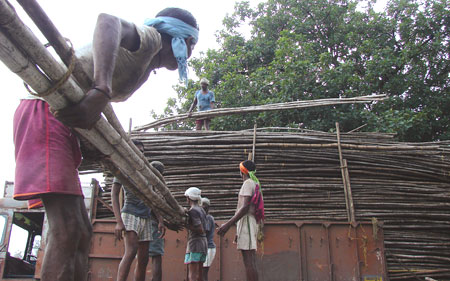 The Parliament has cleared this bill to exclude bamboo from the definition of tree under the Indian Forest Act, stating it would improve earnings of tribals and dwellers living around forests.

A legislation to amend the Indian Forest Act to exempt felling and transportation of bamboo grown in non-forest areas from the state permit, was tabled in the Lok Sabha on 18 December, 2017. The Indian Forest (Amendment) Bill, 2017 — which would omit bamboos growing in non-forest areas from the definition of trees — was introduced by Environment Minister Harsh Vardhan even as BJD leader B Mahtab raised concerns and opposed the legislation. Last month, the government had come out with an ordinance to amend the Indian Forest Act, 1927 in this regard. This bill would replace this ordinance. Prior to issuance of the ordinance, the definition of tree in the Act included palm, bamboo, brushwood and cane. Before the bill was introduced in the House, Mahtab opposed it saying the government wants to do away with the requirement of seeking permission from states for transportation of bamboo.