The major energy resource base in Nepal consists of biomass, hydroelectricity, petroleum products, natural gas, and coal reserves. Among the entire energy resource base, it is evident that biomass is the dominant resource base of the country with respect to its utilization. Biomass provided 86% of the total energy consumption, petroleum 9%, which is mainly consumed by urban areas, electricity only 2% and renewable 1% of the total energy consumption.

Nepal use the lowest commercial energy (around 500 kWh per capita per year) of  all South Asian countries. For the year 2003/2004 the residential sector consumed 90% of the total energy consumption.

Nepal relies heavily on biomass fuel as a result of the lack of development of other energy alternatives and the overall poor economic condition of the nation. Fuel wood is the main source of energy in Nepal and will continue to remain so for a long time.

Forest resources are under increasing threat from the burgeoning human and livestock populations and their need to meet annual requirements for fuel wood, fodder, timber, and other minor forest products. About 44,000 ha of forest area is believed to be degraded and deforested annually, while only about 4,000 ha are reforested.

Nepal has a huge potential for hydropower production, but currently this remains mostly untapped.

The hydropower potential of Nepal’s river systems is about 83,000 MW, out of which only 25 per cent is potentially available. Hydropower utilization is currently less than one per cent of the proven potential.

So far no proven reserves of petroleum suitable for commercial exploitation have been found in Nepal. Thus all petroleum products consumed are imported in refined form for direct consumption. The alternative fossil fuel, natural gas, has also not been discovered as yet in any significant amount. Two deposits of coal are located in Kathmandu and Dang, but are believed to be insignificant in terms of the energy demand. 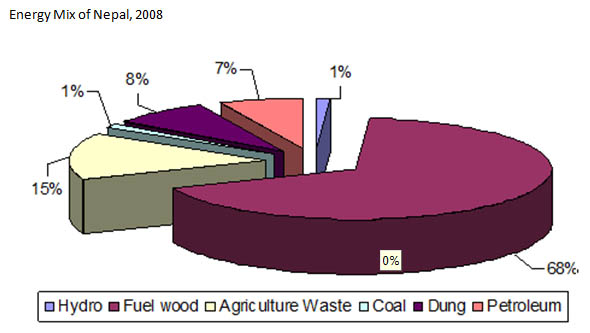 Various kinds of micro-hydro technologies such as propeller turbines, cross flow turbines, Pelton wheels, multipurpose power unites, peltric sets, and improvement in traditional water wheels have been developed in the past to tap water resource more effectively.  They are mainly used for agro-processing activities, and electri generation. Since January 2003, Improved Water Mill Support Program has been initiated to develop and disseminate Improved Water Mill as a sustainable energy source in the mid hill and high hill district of Nepal.

Solar energy has been used traditionally for drying such things as crops, clothes, fuel wood, and crop residues. The solar energy potential in Nepal is estimated to be about 26 million MW. Currently there are two types of solar energy technology in the country: solar thermal systems and solar photovoltaic systems.

Solar Water heaters and solar dryers are the two main types of solar thermal devices. Of these, solar water heaters are popular in Kathmandu. These heaters are suitable for use throughout the country except in those regions that have long and harsh winters where the temperature falls below freezing point. However, because of the high cost, this technology is not affordable for most people.

Solar cookers were introduced by the Research Centre for Applied Science and Technology in 1977 as parboiling cookers. The Centre for Rural Technology, Nepal, took further initiative to promote them since early 1990’s with the government subsidy channelled through alternative Energy Promotion Centre. Because of their high cost, this technology has not become popular in the rural areas.

The solar photovoltaic systems convert solar energy directly into electricity. The NEA has carried out centralized solar photovoltaic based rural electrification in different locations. Lately, private entrepreneurs and NGOs have been showing interest in the dissemination of solar photovoltaic home lighting systems., which are gaining popularity in Nepal.

Biogas technology is considered to be one of the most promising and sustainable sources of renewable energy in Nepal. At present most biogas plants are in the Terai, but they are gaining popularity in the hill regions as well. Due to its cold climate, the mountain region is unfavourable for biogas production. It is estimated that there is a potential of 1, 3 million household biogas plants in the country. By the end of the year 2004, 123,395 biogas plants of different sizes have been constructed so far in the country benefiting 860,000 persons directly. Annually biogas plants in Nepal save more than 2309,000 tones of firewood and they replace 3,830,000 litres of kerosene every year.

Despite biogas technology being fairly successful at present, a number of technical and institutional problems have emerged that will greatly retard the dissemination of this technology. Lack of adequate water supply required for operating the biogas plants in the hills and the mountain areas is often reported as a hindrance to the establishment of such plants. It is also found in some cases that the operation and maintenance of biogas plants has increased the workload of women, as they have to carry more water.

Community level biogas plants have not yet been fully developed and promoted. , and the interaction between designers and end users is poor, which does not help to improve the design.

The current state of development of biogas in Nepal is largely the result of incientives provided by the government, as a plan for the installation of biogas plants was first incorporated in the Seventh Five Year Plan (1985-90). During this plan period both capital and interest subsidies for the biogas programme were provided by the government through the Agricultural Development Bnk. This subsidy program is now being continued with the Assistance of the Government of the Netherlands. Cost-effective designs, long-term biogas development programs, as well as institutional and credit/incentive mechanisms are required to further exploit their potential.

About 11 million tonnes of fuel wood are burnt annually for coking alone. Theoretically, it is possible to reduce fuel wood consumption for cooking by 50 per cent. ICS have an efficiency foctor in the range of 15 to 30 per cent, whereas the efficiency of traditional mud stoves varies from 3 to 15 per cent. Even with a low performance of 11 per cent fuel wood savings, estimates indicate that one ICS can save an average of 1 tonne of fuel wood annually.

This technology is still in its initial experiment phase. A wind power system was installed in Kagbeni to generate about 20kW of electrical power, but was damaged as a result of the poor design. The high installation cost (about US $6,800 per kWh) did not justify any further development.