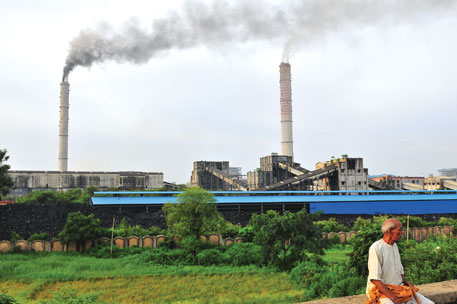 Power plants in India consume water needed for 251 million people - In seven drought affected states they consume water that could meet requirements of 50 million people. Even as India suffers from one of the worst droughts in decades, affecting 266 districts across 11 states, the government continues to be myopic about managing the country’s water resources .Greenpeace India released data on the water consumption patterns of coal power plants in seven drought affected states – Maharashtra, Madhya Pradesh, Uttar Pradesh, Karnataka, Andhra Pradesh, Telangana, Chhattisgarh. Coal power plants in just these states consume water that could meet the basic needs of 50 million people for a year. A Greenpeace India analysis of a report released in March this year estimates that the total freshwater consumption of coal power plants in India is 4.6 billion cubic meters per year. This is enough to meet the basic water needs of 251 million (25.1 crore) people. This figure will more than double if all proposed plants are built. Coal power plants are amongst the most intensive industrial users of fresh water. Despite this being a drought year, the water consumption of coal power plants in India has not received sufficient attention from policy makers and government.